What can you do with a handful ammo of bombs? Apparently quite a bit in BombHopper.io, a physics-based puzzle platformer where you play as Hoppi, a cute yellow square who has to rely on its ammo supply to safely find its way out of the strange world it lies within. When we think about bombs, we tend to think of their destructive nature and would expect to detonate them in games to damage various things like enemies and obstructions. However, instead of blasting ammo for the purpose of destruction, the main focus in this puzzle platformer is on the resulting thrust force that sends Hoppi, an otherwise inert square, propelling forward.

Currently, there are 48 short puzzle levels available in this casual browser game and they are presented in progressive complexity and difficulty. While more levels are expected to be added in the future, the existing set already provides around twenty minutes (and more, if you are retrying for better scores) of puzzle fun. 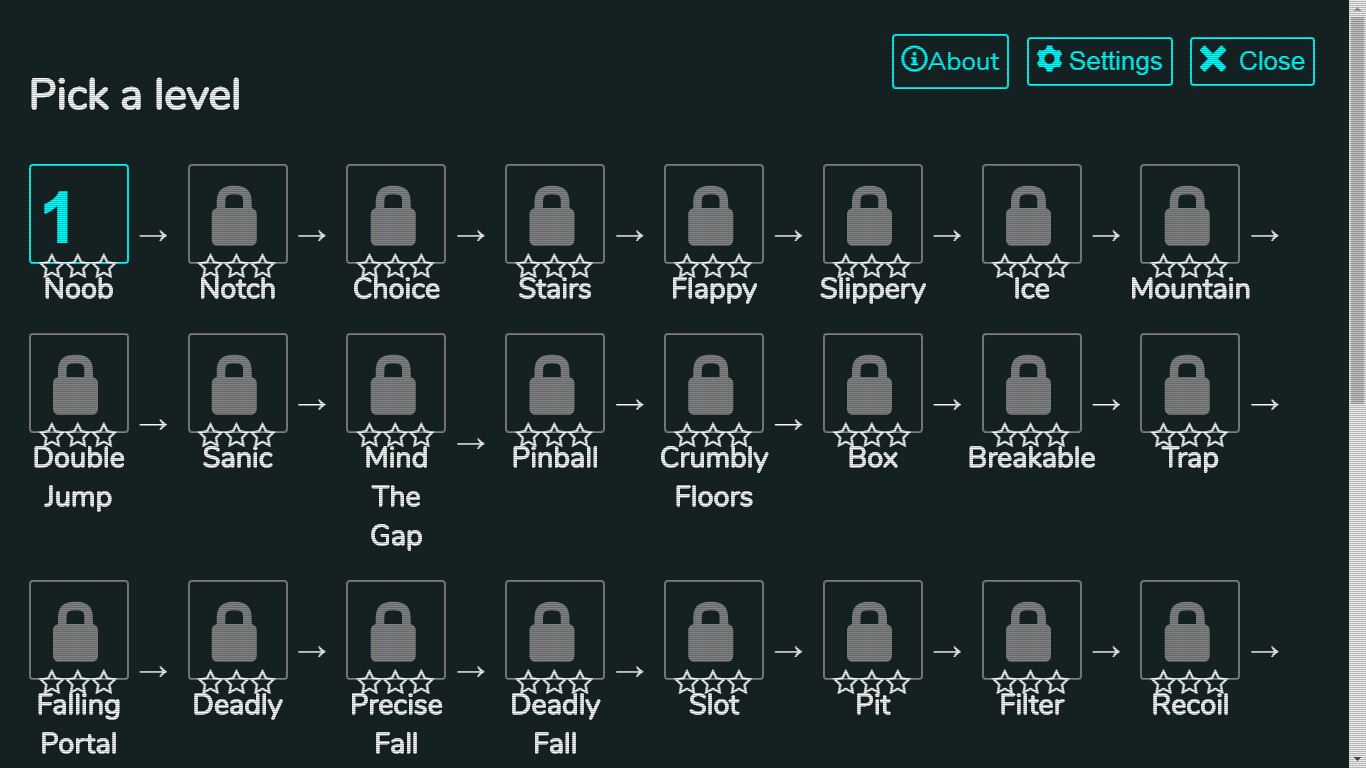 The world in BombHopper.io is made up of simple basic shapes and specific colour codings that are pretty intuitive. Platforms in grey denote a regular concrete surface, while blue shapes denote a slippery surface (cool like ice) and red ones indicate an instant kill pitfall (dangerous like fire). There are also purple breakable surfaces and orange elastic boundaries that open even further possibilities for level design. Last but not least, the exit point of each level is a conspicuous green door. All these neon coloured elements are placed against a dark backdrop, which makes for great visual contrast.

Menu buttons are kept to a minimal and positioned along the screen borders, creating a distraction-free user interface (UI) layout that allows players to focus on the puzzle itself. The buttons are pretty standard: “menu” for viewing the overall progression map; “restart” for retrying the current level afresh; “skip” for moving to the next level without solving the current one by watching an advertisement; and the self-explanatory “fullscreen”.

One particular thing that surprises me regarding the UI design is the cue pointer that will point the player to the “restart” button when one did not manage to clear the level but still kept trying to fire despite not having anymore ammo. And this cue pointer is not simply static; it grows in size and eventually blinks in bright red with each fire one tries to make on an empty ammo slot — talk about some rather attention grabbing visual cue! 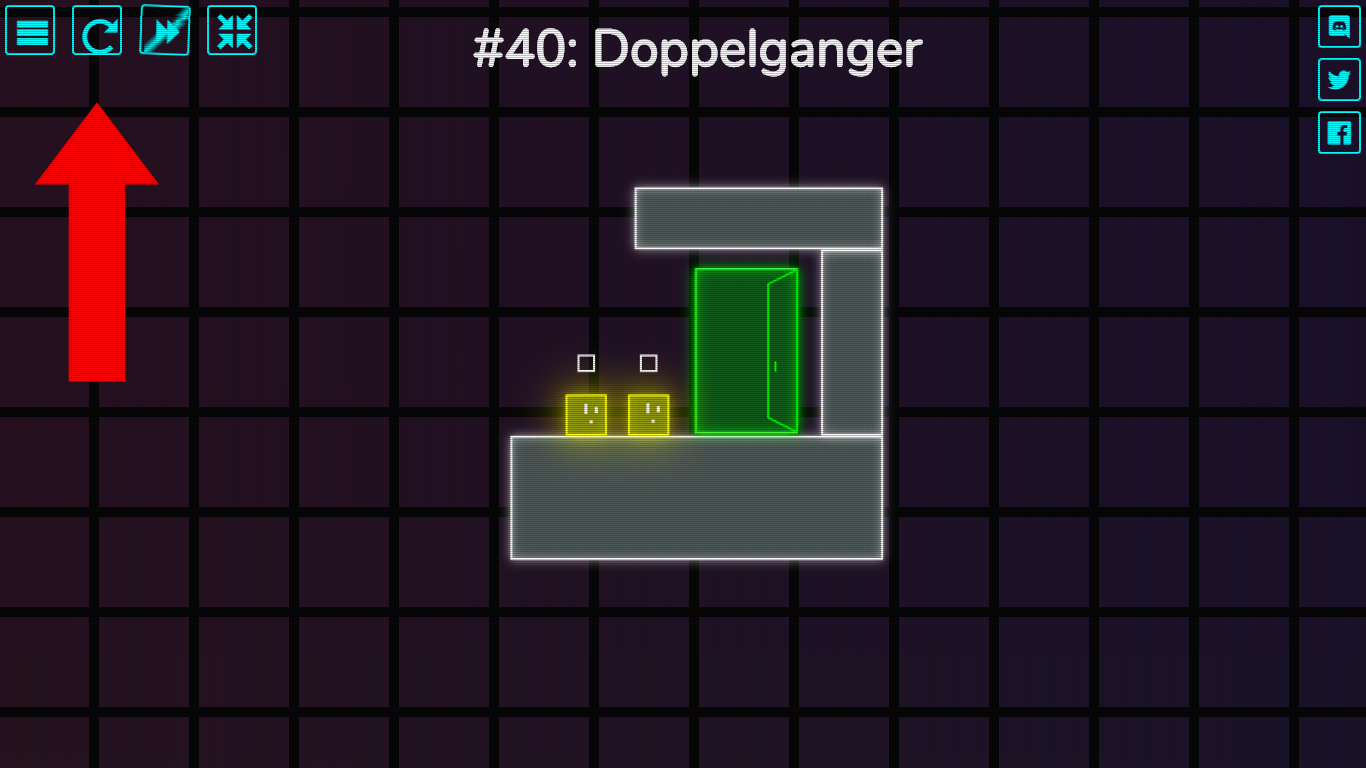 Playable with just a mouse, BombHopper.io challenges players to propel Hoppi to the exit using only the given ammo. Even though there is no wordy tutorial or explanation prompt given in-game, the puzzles are presented in an intuitive, easy to understand manner. I find the learning curve comfortable as the levels introduce new elements gradually, and the individual level’s name generally provides players with a hint about that particular level’s objective.

Apart from the variety of environmental elements present, the game also incorporates different ammo supply and types available. In the easier levels, players are given an unlimited number of ammo to spend but the game soon challenges them to complete a particular level with limited number of ammo fires. There are also two types of bombs present: orange bombs that detonate immediately upon contact with a surface and red bombs that detonate only after a few seconds. This variation in ammo type, albeit subtle, has a significant impact on how a level may be approached. Despite being a puzzle game, BombHopper.io’s solving mechanics actually lean more toward hands-on trial and error rather than strictly intensive thinking. With enough patience, one could solve most of the levels via pure experimentation. Naturally, coupled with an adequate understanding of the physics and rules underlying the game, the time taken to solve a level would be shortened. Beginner friendly, BombHopper.io is suitable even for players who have never played similar genres before.

Of the available 48 levels, some of them require players to think outside of the box while a few are grouped around a general idea with minor alterations to the puzzle setup that have little to no effect on its solving method. This results in some of the levels bearing much resemblance to earlier levels and giving a sense of repetitiveness. While present only in small numbers, the similarly repeated levels may still feel boring for players who enjoy racking their brains instead of memorizing.

For the competitive players, BombHopper.io offers a stars system that reflects how fast a level was completed. Each level has its own time requirement set for players to achieve that full three stars rank. To fulfill the needs of those who like to share their personal best timings on their own social media channels, the browser game has embedded Twitter and Facebook share functions (the latter, however, is still in development). On its own, BombHopper.io is fun to play until one has cleared every level and attained the best timings for all levels. It may seem like this browser puzzle game is good for only a few short playthroughs but since April 2020, the developer has been pushing out beta features supporting custom levels, greatly expanding the fun that players can possibly enjoy with this little bomb physics puzzle game.

Best accessed through a desktop browser, the custom level editor allows one to design their own playable levels by playing around with the available game elements and Hoppi. The editor supports saving and loading, which makes it convenient for one to keep their current level edits and continue working on them at another time. Once logged in with Discord, one could also submit their creations to the growing list of custom levels that is accessible by anyone to play. The next time you are looking for a quick puzzle game that also features a relaxing music track (composed by Koku), do give BombHopper.io a try. You can now even design your own custom levels for others to play if you are feeling creative. Finally, stay in the loop with the game’s active development and share your adventures with other players in the official Discord server!

Get ready to hop on and blast off!