In my opinion, there are two types of gamers in this world. Those that give up after several deaths / in-game failures and those that are determined to beat the bloody thing. If you are the former type of gamer then this game is definitely not for you. Frostpunk is a city builder survival game that brings together the Victorian Era with modern climate change issues. In-game, the entire world is covered in snow and temperatures can go beyond negative 50 degrees. The only way to survive this cold, is with a generator. The generator provides heat on various levels for the civilians of your city/town. Whilst trying to keep this plate spinning, you civilians will try to throw some curved snowballs at you, ranging from catching the common cold, to demanding better quality homes that keep them warm. Failure to comply with these demands will result in your banishment. On top of this (and to quote from a famous TV show) Winter is coming! Literally! All these plates have to be kept spinning, whilst preparing your town for the big freeze.

Throughout the game, you - as the leader - are asked to make some decisions that you may or may not like. You complete this through the 'Book of Laws' where you have to make a choice. Each law you instate will take you down a different path in your leadership. You are torn between moral choices and needs for your town. Do you sign a law stating that children should be apart of the workforce or do you provide them with an education? Do you sign a law stating that everyone gets a day off work when someone dies or do you just throw the body into a snow pit and be done with it? Some of these laws makes you question yourself as a leader and test your ability to continue.

I do feel that this game should come with a warning! Keep track of your real life time - before you know it, five hours would have passed and you will be wondering what exactly have you achieved in that time?

The game comprises of five or six scenarios and a sandbox equivalent mode. However, with the possibilities being 'endless', I feel that I have only just scratched the surface of this giant iceberg and I currently have over 40 hours on playing time. The research tree allows for your civilisation to grow whilst the Book of Laws allow you to decide which paths you are going to allow your civilisation to take. The path of Faith or the path of Law and Order. 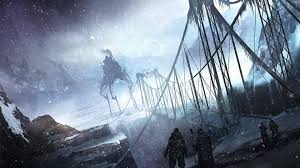 Whether you are completing a mission or whether you are failing one, the cut scenes are nothing spectacular and are what I like to call, moving pictures (an item or two in a still picture that has animation) but, they are very well put together. I do feel I need to talk about the artistic work that is involved in the game. The scenery and pictures within the game are absolutely brilliant. They give you the information that you need whilst keeping the game simple. The in-game animations themselves are amazing! Watching people trying to work their way through the snow, leaving their footprints and trails in the snow is very clever.

The soundtrack for the game is dramatic and keeps you alert and to me, makes you feel as though you are listening to a movie. The composer Piotr Musial has created a fantastic set to accompany a fantastic game! You can listen to the music by clicking on this link. Once the completion of a scenario is successful, you then find out a little secret about the game. Don't worry, I am not going to spoil it here but all I am going to say is - DON'T HIT THAT ESCAPE BUTTON! Let it play out!

January 21st, saw the release of the second DLC pack from 11 bit Studios for this game. The DLC is called 'The Last Autumn' where you are transported further back in time before the cold and the climate issues to a time where the civilisations within the game realised that the climate issue was going to happen. You learn to build the generators and have several new buildings and laws to sign within the Book of Laws. Already, this DLC has been a monster to try and beat and I am personally loving the challenge.

11 bit Studios have announced that there will be another DLC pack this year (2020) called 'Project TVADGYCGJR' (Not got a Scooby Doo how to pronounce that one so I will leave that to the professionals.

) However, if The Last Autumn is the standard that is being produced as a DLC from this company, then I am super excited and cannot wait for the date to be released.