:: Content
Cartoon Violence, Mild references to sex and drug use

After having come a long way since its Kickstarter campaign in 2014, Yes, Your Grace — a medieval kingdom management game that puts you on the throne overseeing all things big and small happening in your realm — entered a week-long public beta phase on 15 November. The Steam beta, available to all who have signed up for it through the game’s Discord server, provides an hour-long peek into this upcoming title that couples simple management gameplay with charming storytelling. 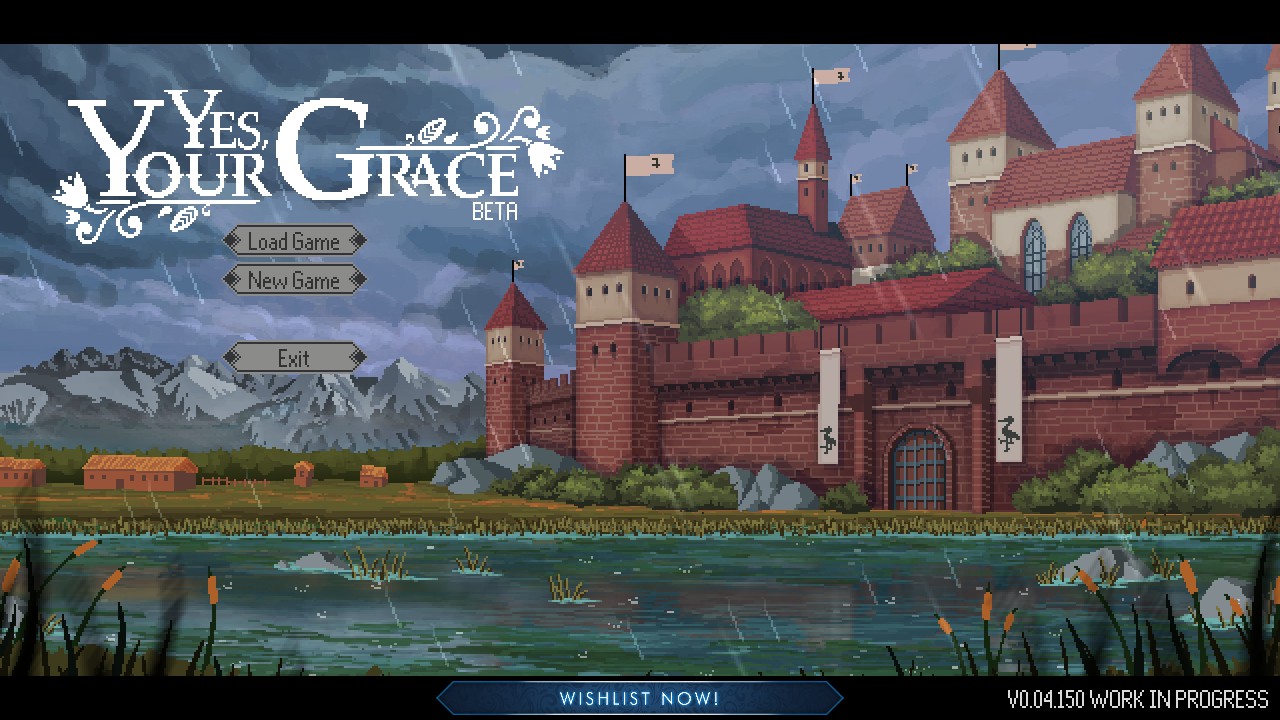 The concept of the game is straightforward: be the King and tackle the kingdom matters as you like. However, you are not just any random king but the King of Davern, a man named Eryk who is happily married and has three daughters. That is to say, this beta showcases not a generic management game but one that is woven into a set lore and a particular character’s point of view. There are no customization options for the main playable character but you are still free to choose how you would want to use the kingdom’s available resources, such as gold, food supplies, and hired helpers.

Time goes by weeks in-game. Every week, various people, ranging from family members to peasants to lords, will queue up for an audience in your throne room. Each one of them comes to you with their issue and in most cases, it is up to you how you would want to aid them (or not). 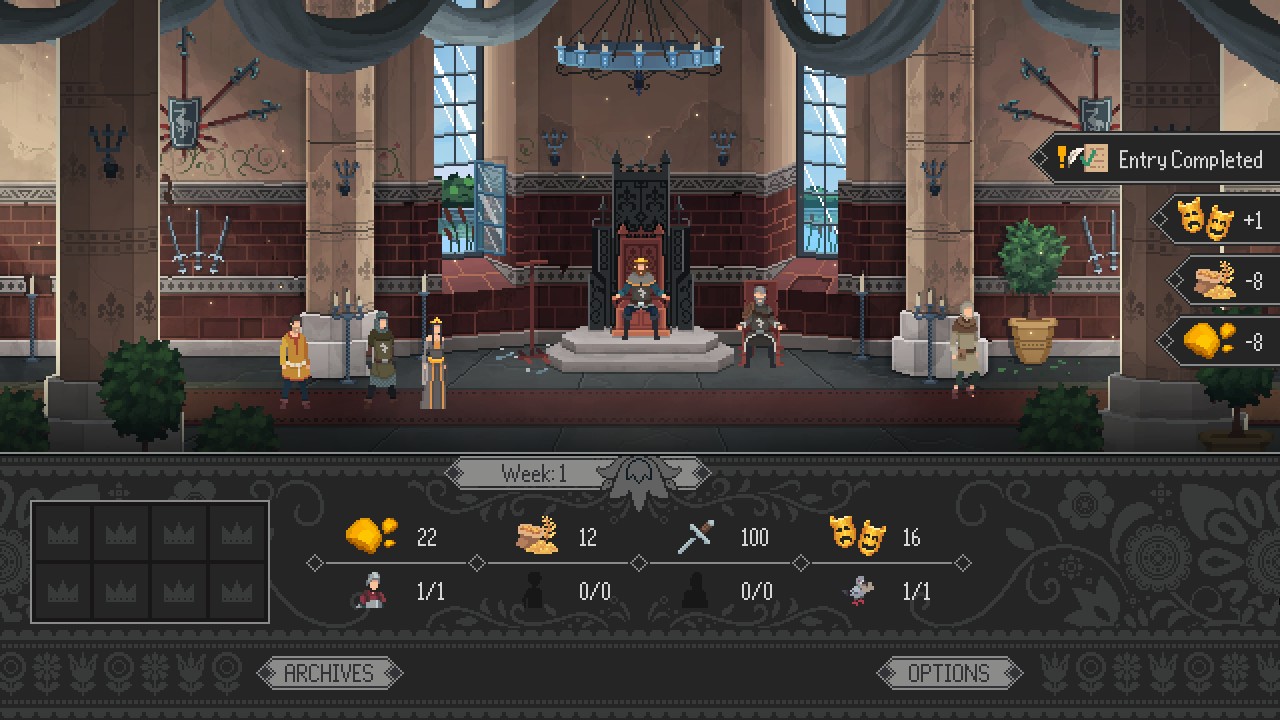 With regard to the management portion, I find it rather easy — at least for up to the first eight weeks available in the beta. In fact, it takes me really deliberate squandering of resources in order to lead the kingdom to ruins. Such a low difficulty implemented can be said to be a double-edged sword. On one hand, it allows even new players to progress onward easily for the story, which is the other big part of the game; however, it probably would not satisfy those who are looking for a more strategic planning experience. The system seen in the beta is really lenient and does not really require players to pay very careful attention to what they are choosing. Still, this is only based on what is shown in the beta, where consequences of several choices have yet to make themselves known for now. Perhaps, in the final game, long-term repercussions would eventually even out the seemingly trivial short-term effects.

As the game goes by a weekly schedule, the pacing can feel a little fast. Story-wise, it makes sense for events to progress in terms of weeks. But in terms of listening to the petitioners, it does feel like there is a lack of opportunity for more resource-dependent problems to be tackled. There can only ever be that many petitioners showing up per week, after all.

When it comes to guiding players, I think the tutorial prompts are pretty clear and do a good job at explaining various elements of the game. One of the things that I find lacked explanation is the upgrades listed under the weekly summary; for quite a while, I did not realize I had to manually click on the upgrade for it to apply. Another part that lacked explanation is the icons, though a simple tooltip label should suffice as most icons (like gold and grains) are pretty self-explanatory. Also, it may help if players are told at the beginning that they can ask Audry the Advisor for more information on running the kingdom. Given that the chat with Audry is optional, I would not be surprised that some people missed it entirely at first. 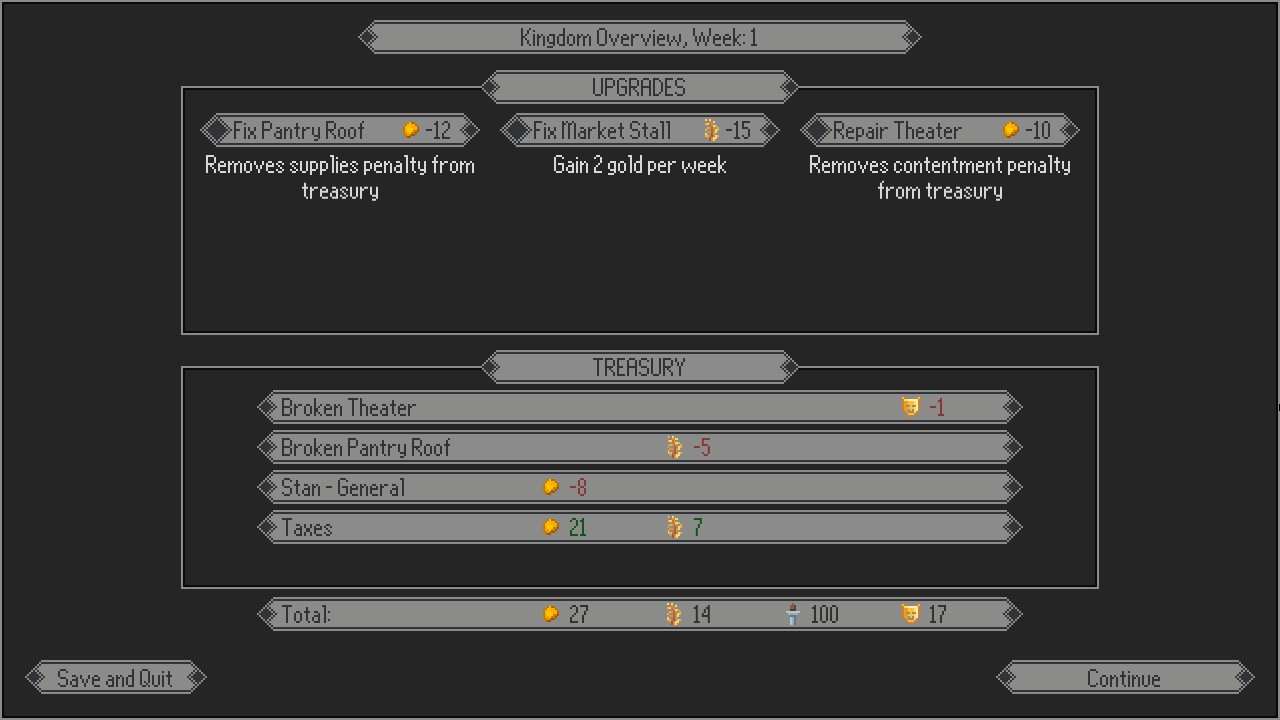 Because Yes, Your Grace essentially hinges on resource management, I also appreciate that important choices involving consumption of certain resources are properly labelled. Overall, I find the texts written for the choice system easily understandable. There is hardly any ambiguous moment that would make one wonder what a certain choice actually means or what immediate outcome a given choice would cause.

What is equally clear-cut is the User Interface (UI) design. Currently only with mouse control support, the game sports a UI that is generally easy to navigate around and click on. Not to mention the layout is neat and pleasant to look at as well. While there appears to be some issues where some lines of dialogue texts appear blurry, the font size and colour contrast used are reasonable to make reading comfortable. The decision to use different colours for different characters’ dialogues is a nice touch too, although some colours can look a little too dark for the dialogue bubble.

Small notification banners that slide out from the right side of the screen upon important changes, such as gold added or deducted, are great visual cues. However, similar helpful visual cues are not used within the Archives (a journal detailing quests and character information) at all and this made checking the Archives for unread or updated entries a really unintuitive task. 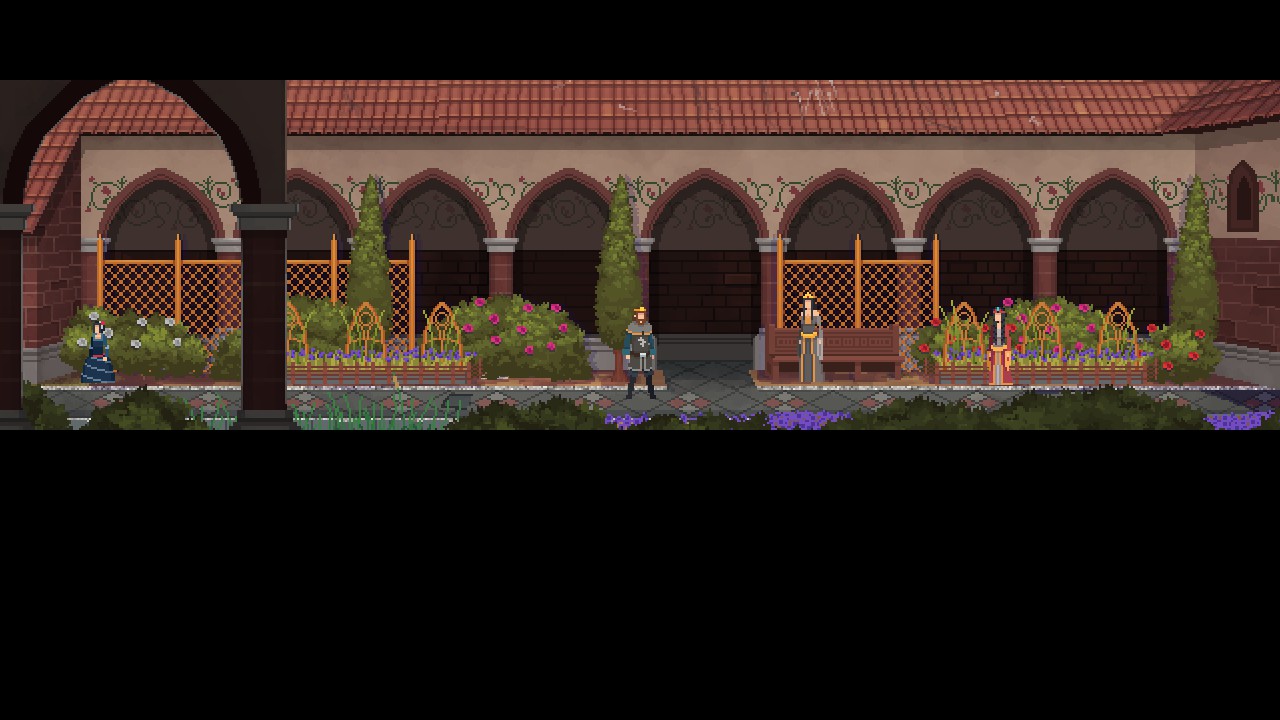 Apart from some minor animation issues, the pixel art in the game is beautiful. I especially love the detailed background art that brings every venue in the Davern castle to life. Characters are appropriately represented via their designs; the wealthy don more fancy garbs while the poor wear simpler and even tattered clothes.

Music is another component that adds flavour to the various venues and scenes in the game. Despite the limited number of tracks available in the beta, I feel every track has played its part well in heightening the emotions of particular scenes.

Last but not least, the story itself is something to look forward to in Yes, Your Grace. Even though the plot events progress rather quickly, they still flow smoothly. The game’s storytelling is pretty engaging with hardly any boring moments, and the interactions with the family members, while sparse and short, are impactful. It did not take me long to fall in love with the youngest daughter and it certainly pained me to see that a heartwarming moment ended in the blink of an eye.

Nevertheless, people who have played through the beta multiple times would realize that a large part of the story is linear and unaffected by varying choices. Different dialogue options would lead to different lines that follow but ultimately, what you chose had no real bearing on how the plot events would unfold. Even clearing optional conversations do not reward you with any significant changes to other related dialogues or unique follow-up dialogues afterward. As far as the beta is concerned, the only way to acquire different endings is to fail the kingdom management part in different ways. 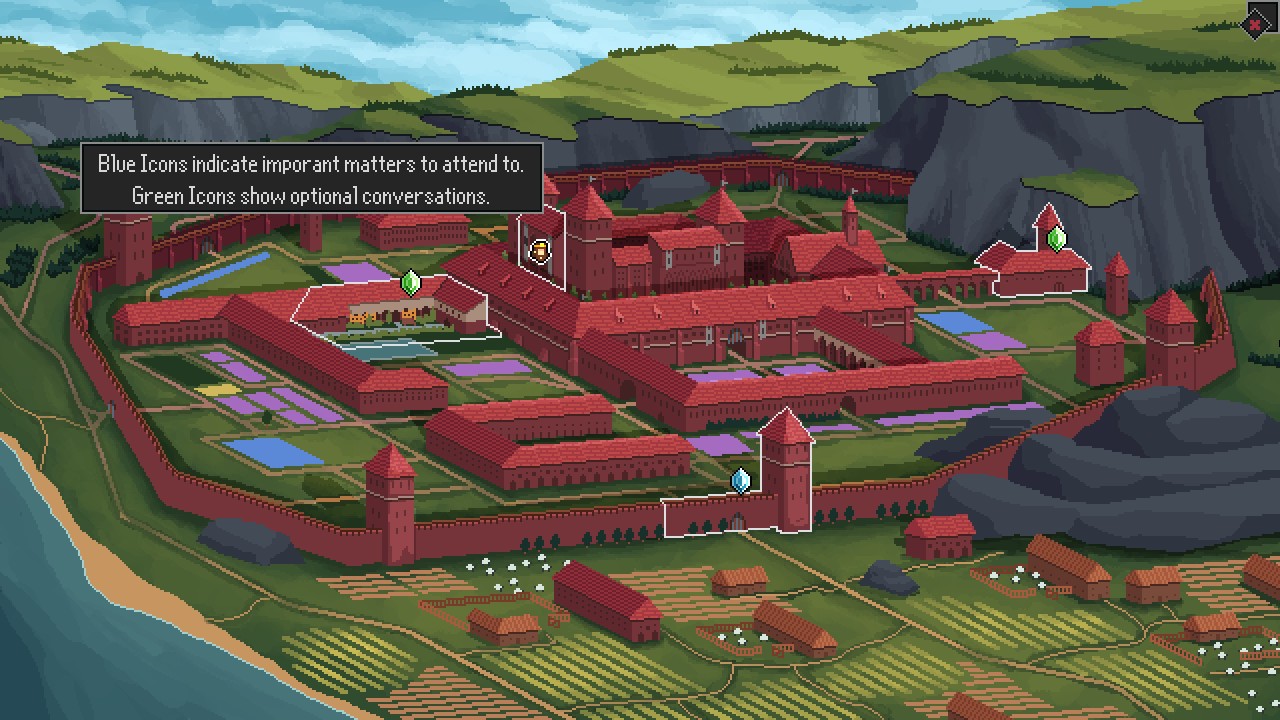 In spite of the short content length provided in the beta, it still gives an idea of what we can expect from the full version — a fun little management game with an overarching story about King Eryk and his family to tell.

If you have played the beta and still cannot get enough of it (what a cliffhanger it ended on!), feel free to hop into Yes, Your Grace Discord and join the on-going meta game. In any case, do wishlist the game on Steam if you want to get notified once it is released early next year! 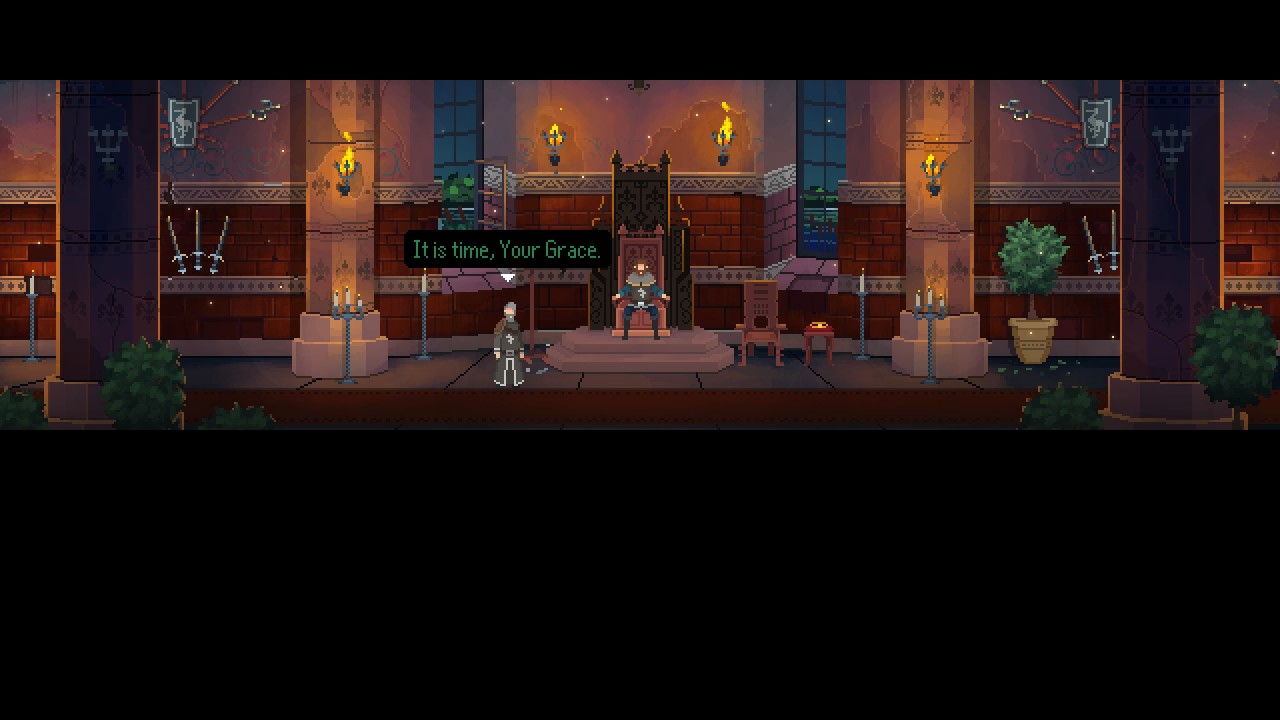