If you find yourself skimming around the internet for games, you may stumble upon a little game known as Galaxium. Now Galaxium is heavily inspired by 70-80's arcade games, and one in particular, Space Invaders. You'll play as this robotic character, and the premise of the game is to stop an extraterrestrial invasion upon Earth in the year 2137.

Several years prior, we had discovered a new element known as Gaium. Using this element, we could now travel faster than the speed of light, which opened our ability for vast space exploration beyond comprehension. Unfortunately, things go awry, and one of the ships using Gaium explodes causing a blast to travel throughout the universe. Time had passed, when one day, an invasion had struck earth unexpectedly. An alien race known as the Kroh is aware of Earth's newly discovered element and plans to take it by force. Unsuccessful, Kroh retreats, and we are safe for the time being. Enter the year 2137—Kroh returns to take what they desire—but we stand ready to defend our home. 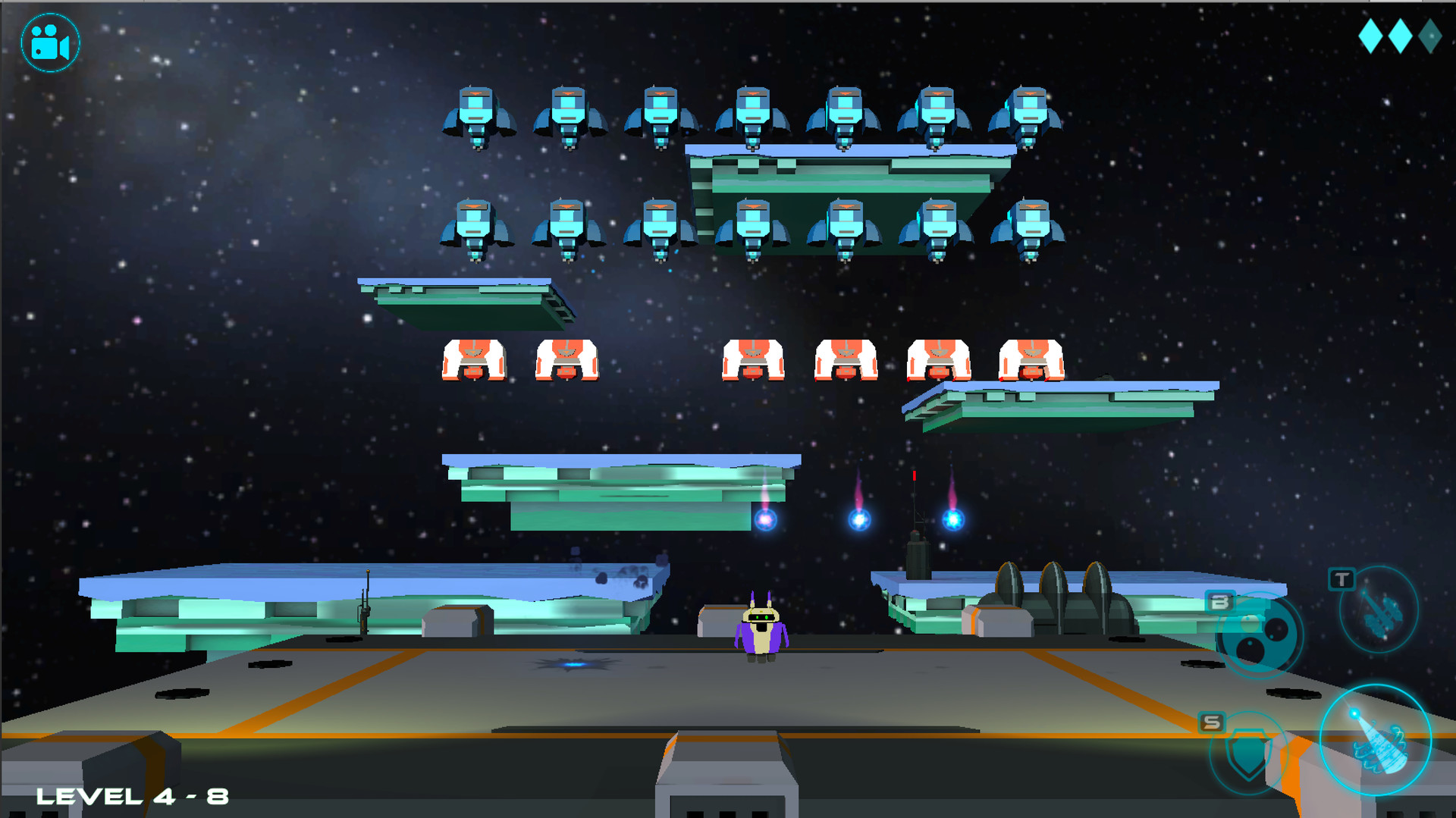 Blasting into gameplay, Galaxium is an arcade shooter at heart. The adorably small robot you play as is named GAIA and works diligently to prevent Kroh from invading Earth. Simple yet effective mechanics will be your greatest ally here. Shoot down hordes of enemies, creeping ever so slightly closer and closer, moving left to right and avoiding enemy fire. You'll gather a couple of power-ups to use and gain the leading edge over your foes. These power-ups include a hyperjump, burst shot, bomb cannon, and a shield. The hyperjump is something that you will pick up on the field, but the other abilities are on cooldown and light up once they are ready for use. Like I aforementioned, the game has very simplistic mechanics and you'll find yourself repeating these core mechanics through the entirety of the game.

The game has a rating system that is based on your accuracy per shot landed—earning 1, 2, or 3 stars for that percentage. I've never been a fan of rating systems, especially in games like this, because I always find myself wanting something out of it other than bragging rights. Meaning, if the game gave you additional power-ups or cosmetics to use based on your rating, I might be more willing to reinvest my time into earning that prestigious rating. 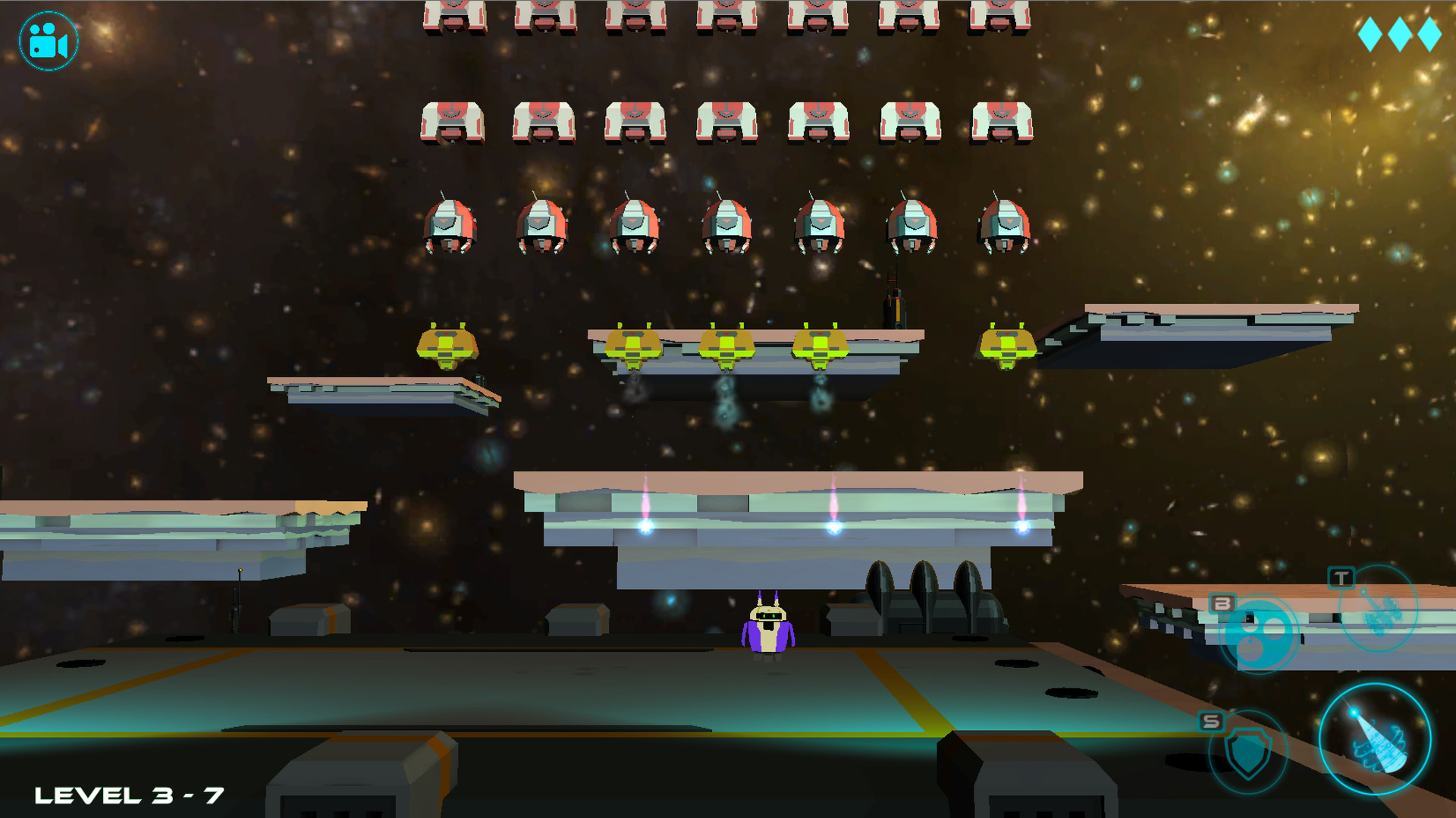 Much like any game, your progression can only mean one thing—increased difficulty. You'll play a series of levels, each adding a slight bit of challenge as you go. Different enemy types will flood in to keep the game from feeling too stale. I wouldn't say the enemies are harder to beat in any way, but it's more on how many shots these new enemies can withstand. I will say, I kind of craved more than just a simple format of enemy mechanics where they would shoot and travel back and forth. As far as enemy designs were concerned, I loved what vision they had for each new character.

Galaxium uses a unique art style to set it apart from the 70's hit game, Space Invaders. The game was done in 3D rendered art, and feels somewhat alive despite the fact that everything in the game is robots. Maybe the character you play should be nicknamed "Johnny 5"...(Short Circuit reference there my friends). Also, I'll say it was quite dissimilar with the given option of changing camera angles while playing. It gave the player another perspective, which I felt is a great addition. The 3 camera angles are as follows:

On to more critical points for Galaxium. I didn't particularly enjoy the speed of the game and often felt like it should be faster. However, the slow speed of the game could have been due to the computer I'm using as I've noticed a difference in speed with gameplay trailers. For my experience, though, there were a handful of times when I'd find myself on one side of the field, trying to get to the other, and it feels like a drag. Secondly, shots wouldn't always land on an enemy when it appears to make contact. With accuracy being a vital part of the games rating system, it's important to the player that each shot makes contact. I'm sure it's an easy fix, but as it stands, there are a few times when shots miss their mark. Lastly, music was a bit repetitive for my taste. I'm not saying the music was bad, but I would have liked more variety when playing the game.

Overall, I think Wulum did a great job with Galaxium and they should feel quite accomplished with all the hard work that was pumped into creating this game. No, the game wasn't perfect, but I had a great time diving into space and blasting the Kroh into oblivion. Wulum has a bright future ahead, and I look forward to playing more of their upcoming titles.

A code for Galaxium was provided to Indie Drop for review purposes. Thank you!!