:: Game Title
Hope; or How We Survived

Set in a zombie apocalypse world, Hope; or How We Survived is a narrative focused game that tells a short tale of surviving as humans amidst the continual threats and dilemmas to be faced. You play as a tower guard whose daily job is to protect Hope, an enclosed settlement for survivors, by fending off incoming zombie-infected creatures with firearms.

The game depicts but a small slice of the tower guard’s life; the story begins on a day when an injured person came scrambling alone seeking aid. However, in order to ensure that they have truly not been infected, they are only allowed entrance into the settlement after seven days. In this one week, you are to carry your tower guard duty as usual, protecting this stranger as well as the residents within the settlement. 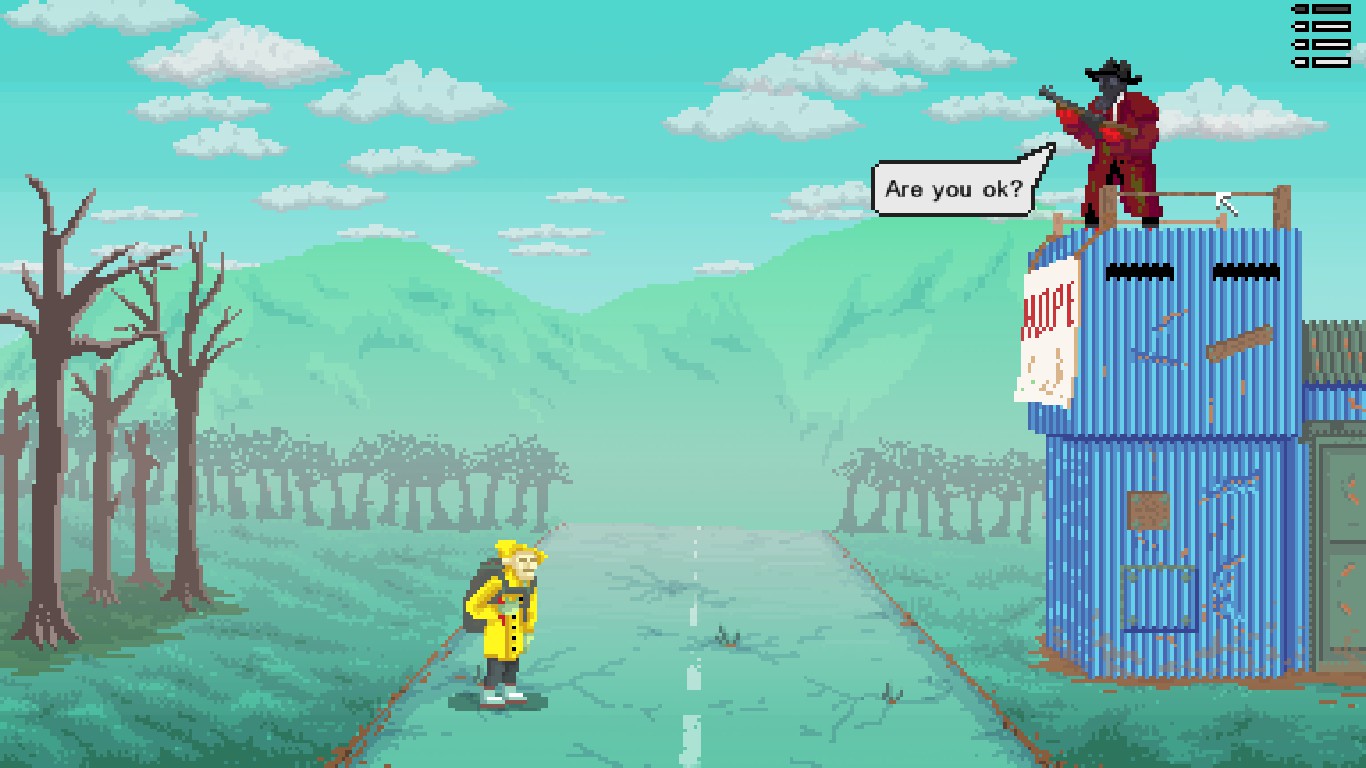 For both visual and audio aspects, I would describe the game as going for a minimalist style: everything is kept simple and only necessary elements are provided. On the surface, it may look like such a style lacks appeal, yet considering the dreary zombie apocalypse setting, I think the choice to keep things to the bare minimum is a good call. In fact, the general silence and lack of sophisticated visuals actually made me focus more on what I actually do have — the dialogues, the changing weather, the injured person to protect, and the infected enemies to target.

Still, while the choice to keep things minimal is rather fitting for the story, this style does not carry over too well when it comes to User Interface (UI) design. More specifically, I am referring to the “Controls” menu that squeezes text-only details about the basic gameplay controls onto a single screen. Unless one has already learned the controls beforehand or likes to find out by experimenting, one cannot escape from viewing this particular menu because there is no tutorial prompts provided in the main game itself. Granted, the instructions are kept concise and arranged neatly in bulleted points but I think it is the least satisfying part of the entire game’s visual design. 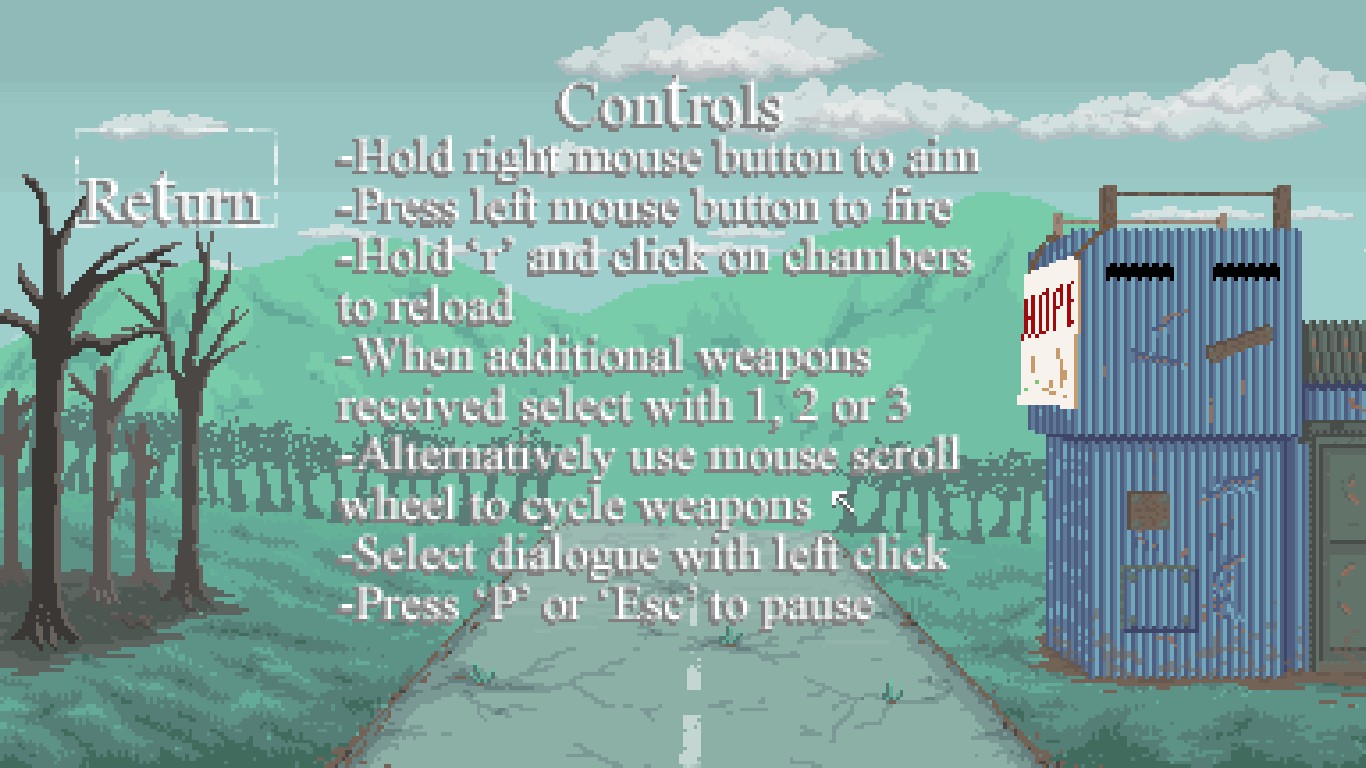 Although there is no background music, the game appropriately uses sound effects (SFX) and short muffled voice clips to portray the various scenes. To my surprise, despite the very limited voice clips available (and I believe one of the clips is actually saying “Merry Christmas”), I do find them quite helpful in bringing out the intended tone in the dialogue lines. And while many may take SFX for granted, in games where the main audio you hear is simply SFX and no music, it becomes something that is pretty important. On that note, I appreciate the effort in adding a variety of SFX (e.g. blowing breeze) to make the auditory experience in this fictitious world resemble more like what would be expected in reality.

Gameplay controls are streamlined as well, with the entire game playable using just the mouse (for dialogue selection, aiming, firing, and changing firearms) and one keyboard key (for reloading firearm). Number keys can optionally be used for selecting a different firearm but I personally preferred the mouse wheel.

In terms of level design, care has been taken in ensuring that the shooting difficulty is increased reasonably over the first few days. The game introduces you to the available infected enemies slowly, starting from the walking zombies to flying pigeons to sprinting chickens. It also gradually adds difficulty by introducing visual noises via the weather, such as the addition of rain and lightning flashes. Even the three available firearms are introduced over time, allowing sufficient opportunities for you to try each one out as you get a new one. 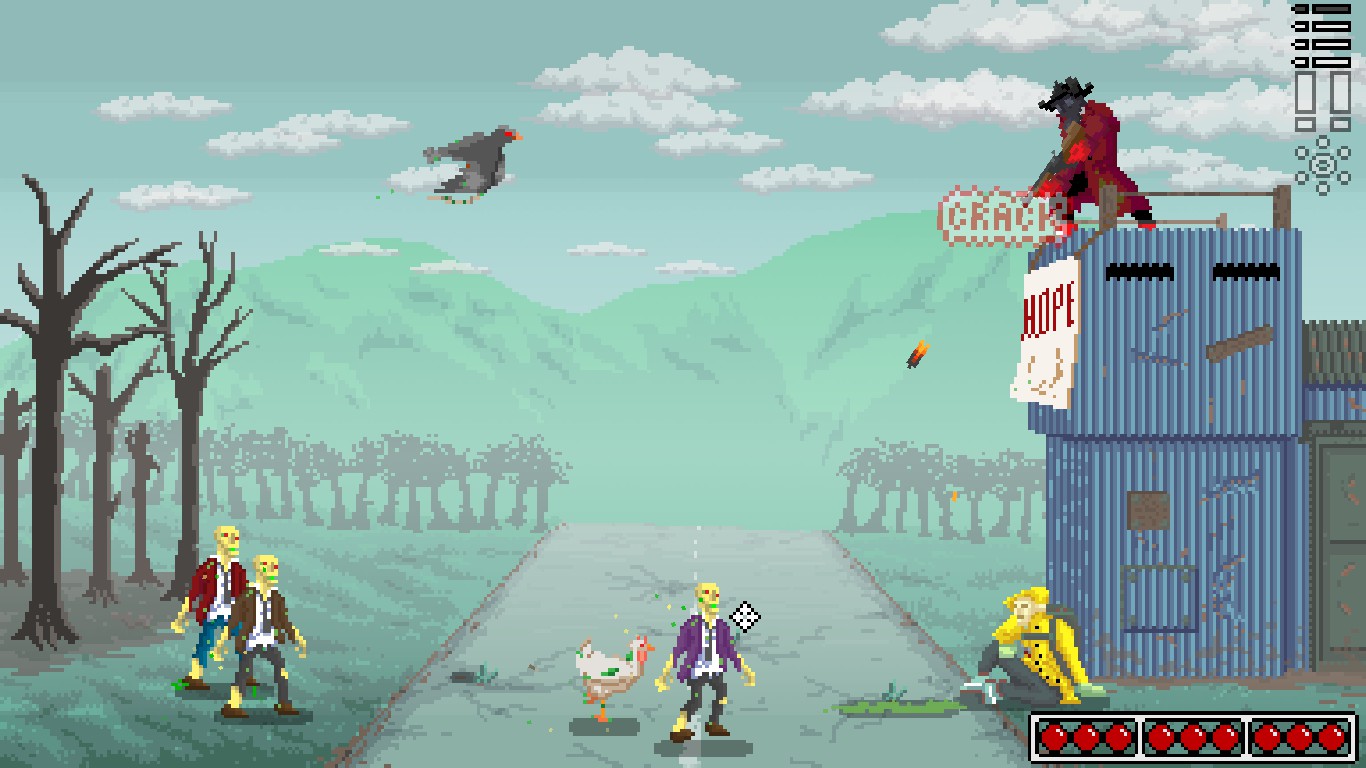 As all the targets are moving and you are stationed stationary at the tower top, it can take a while to learn and get used to shooting the enemies accurately. When I first played the game, I failed during the second enemy wave on Tuesday. But after two more tries, I got the hang of it and could get through the subsequent days in one go — that is, until Saturday.

The penultimate day poses the most challenging level in the entire game with its mob of enemies that never seems to cease. Shooter games are not my forte and I probably have quite a delayed reaction time, so I personally took around 20-odd tries to finally clear that nightmarish never-ending wave of enemies. It left me, a casual player, with so much frustration that I do not have the desire to attempt that level ever again. 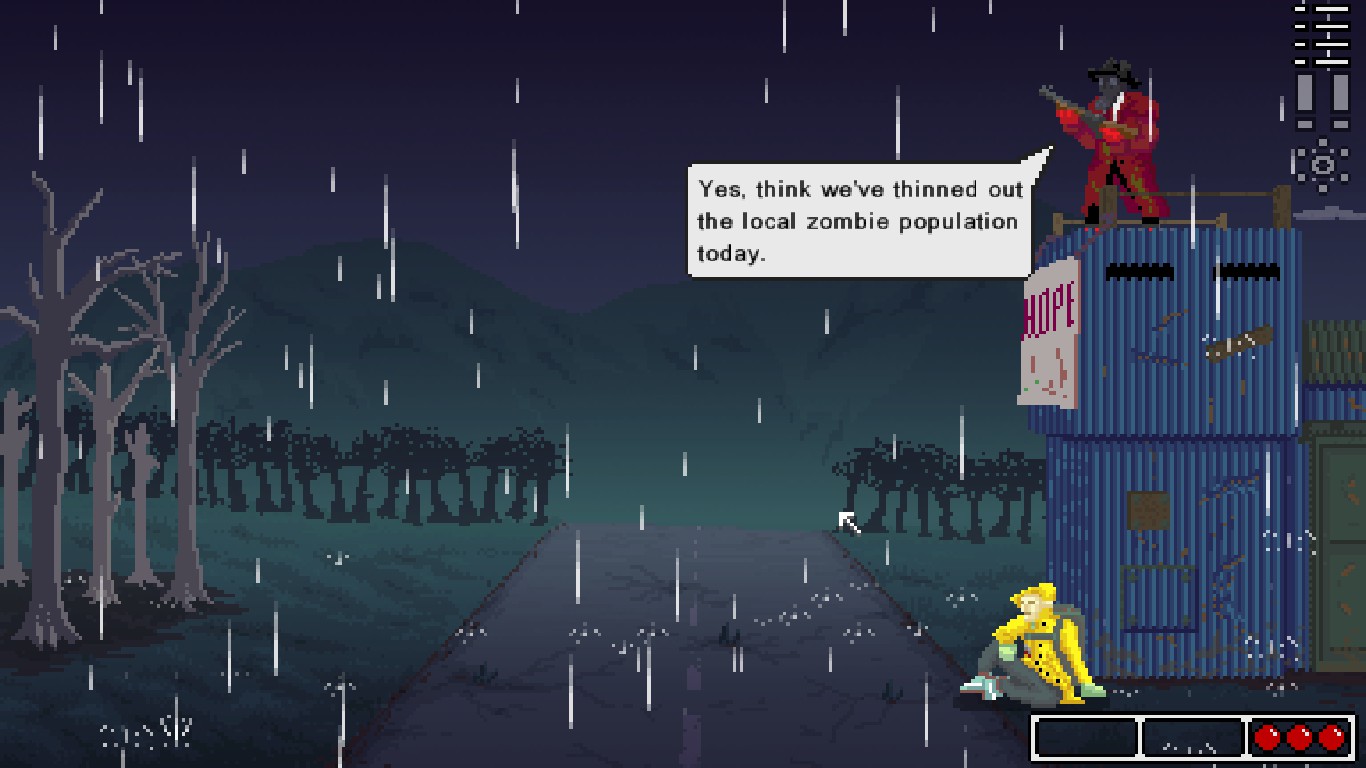 Apart from the huge difficulty spike on Saturday, another thing that fueled my frustration is the inability to fast forward dialogues during retries. Generally, I like the dialogue system and enjoy the pace at which the conversation is set. But the chats become quite a hindrance when I wanted to retry the shooting bit only.

While my experience with the action part of the game is somewhat marred by Saturday’s insane enemy mob, the narrative portion, as told through the verbal exchanges between the tower guard and the injured person, is still decent. We gain some insights about the backstory of the place as well as the characters themselves. However, what I like best in these casual chats is how naturally they pulled me in to care more about the injured person over time. There is a natural friendship bonding experienced within the short seven in-game days, so much so that I actually felt apprehensive about how the story will end once Sunday is reached. 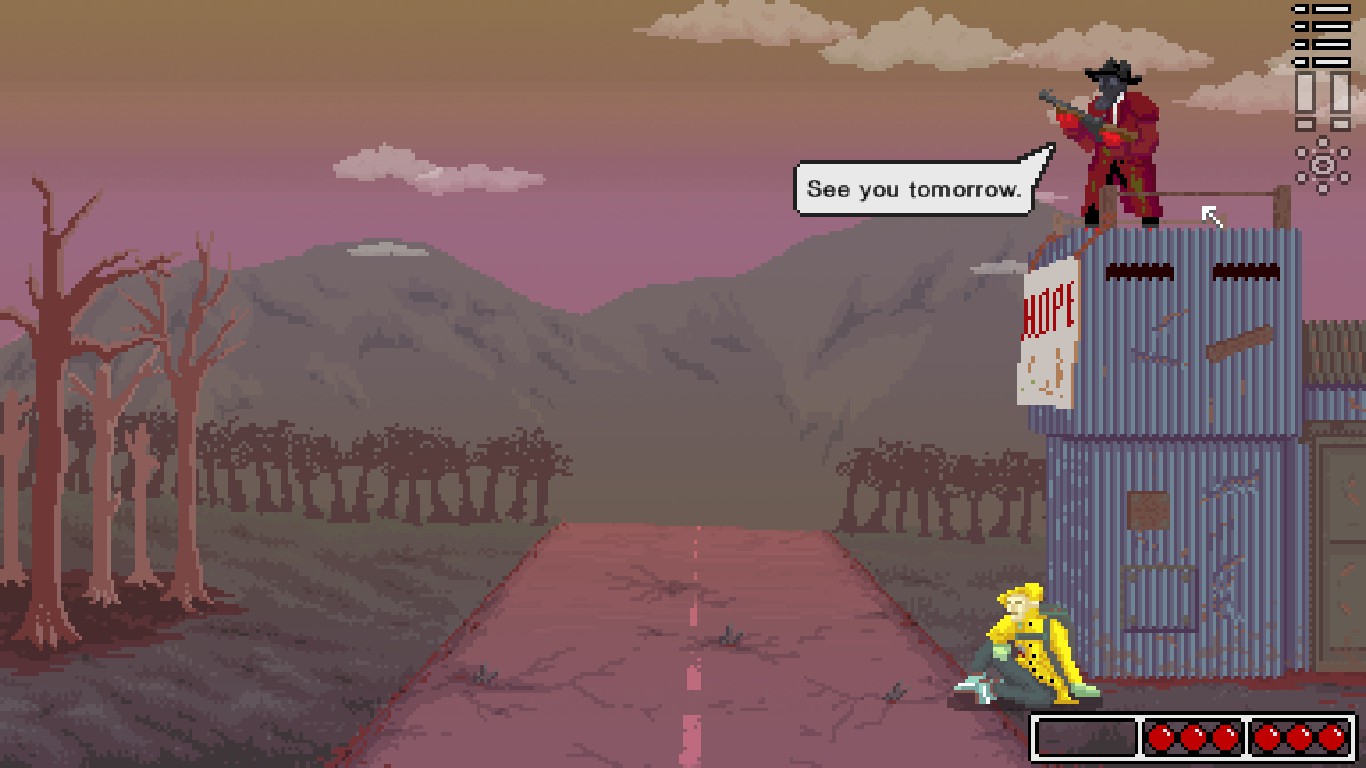 The game features multiple endings. I am unsure how many possible endings there are in total but I managed to get two different endings by changing my dialogue options on Sunday only, which brings me to the common weakness of similar games’ branching narrative: it is not as branching as it seems. Of course, games do not need to have extensively branched storylines in order to be fun. Still, it does undermine the game’s replay value somewhat if we can obtain all the possible endings just by tweaking the final day’s choices.

All in all, the game features a short but rather heartwarming story (“faith in humanity restored” kind) that explores possible mental struggles that humans may face in such an apocalypse. Nevertheless, due to the lack of an option to adjust the difficulty level, casual players may find the shooting tasks adequately challenging and Saturday’s checkpoint rather impossible to clear. Thus, I would recommend this game to shooter game enthusiasts who are looking to read a short positive tale set in a zombie apocalypse.

Sepia Cowboys’ debut game is currently on Steam with a launch week discount of 10%! 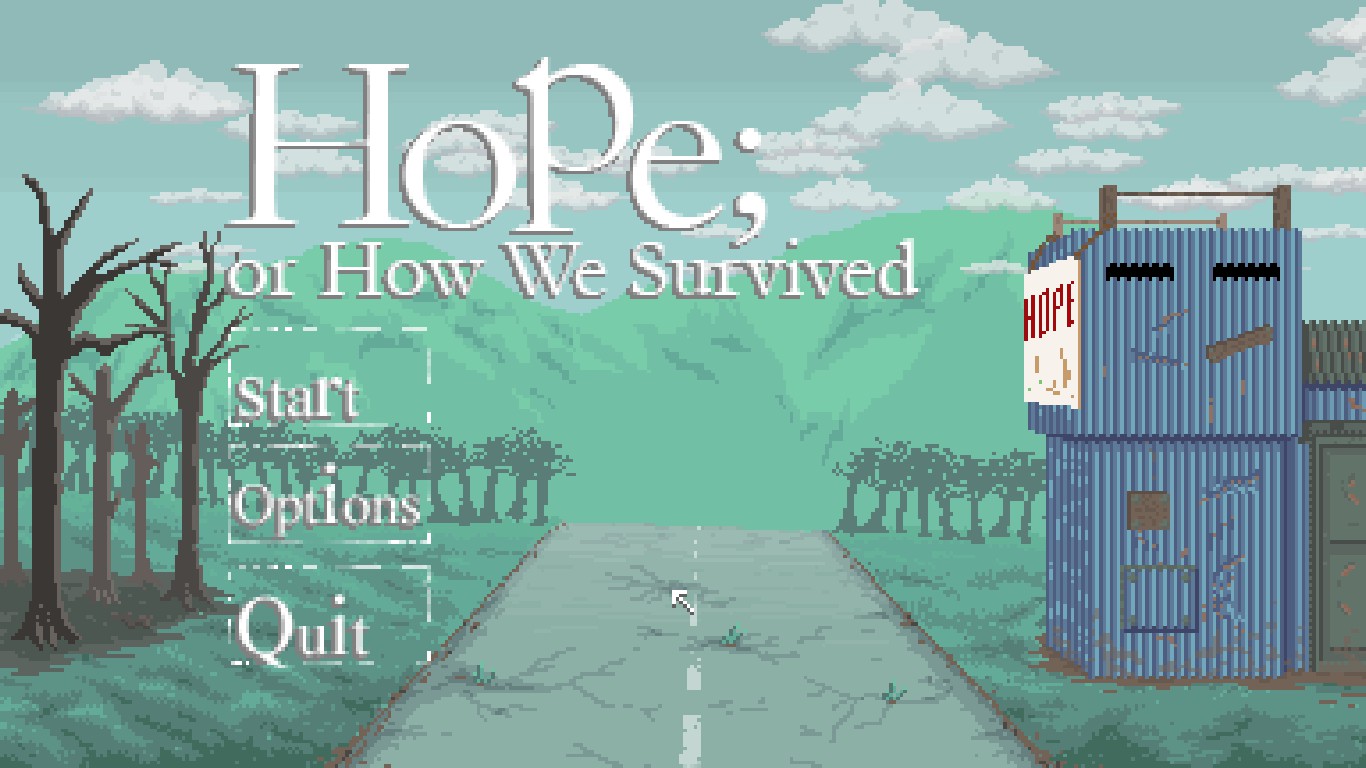